HÀ NỘI — A proposal by the Ministry of Finance to impose a 2 per cent tax on the export of gold products, with a gold content of under 95 per cent, has come under fire as traders claim the tax will cripple their ability to compete. They fear the move will only encourage gold smuggling out of the country. 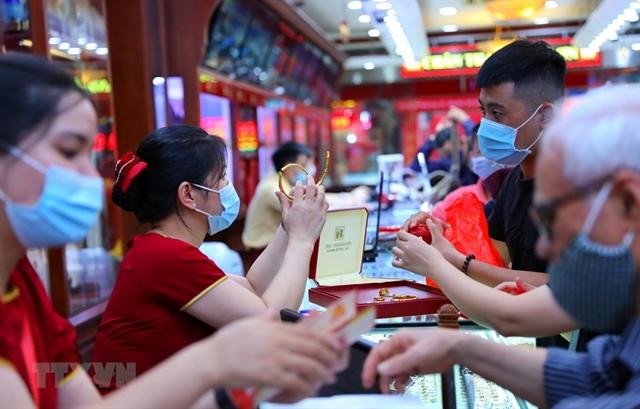 People shop for gold jewellery at a shop in the capital city Hà Nội. — VNA Photo

The Vietnam Gold Trader Association said the proposed tax should be scrapped. The association claimed a zero per cent tax, which is applicable to most exported gold pieces of jewellery and decoratives, was important in the country's ability to generate foreign currencies.

Furthermore, a tax on gold exports would likely encourage gold smuggling across the borders, which ultimately hurts the State's budget.

Any tax on gold exports must hit a delicate balance, said the State Bank of Vietnam, to both help facilitate manufacturing and trade while not hindering the industry. The central bank said further studies on how the tax would affect all stakeholders in the industry must take place.

Vietnam Chamber of Commerce and Industry (VCCI) said the tax would hurt the ability of Vietnamese gold to compete internationally. They had asked the ministry to reconsider.

The Ministry of Public Security said that it supported the tax as gold held a high price domestically at the moment, which would translate into a low amount of gold being exported anyway. They have suggested the Ministry of Finance take time to conduct further studies.

A spokesperson from the Ministry of Finance said one of the major shortcomings in current regulations was the difficulty to categorise gold products with different gold content, which would often require a series of tests to determine. The ministry said it's high time that gold products be categorised based on gold content, or purpose of use, to cut expenses on export procedures and testings.

The association said Vietnamese gold traders already faced higher prices for input materials as they were not allowed to import gold to produce jewellery. They have to instead source gold domestically, which costs around VNĐ6-8 million (US$264-352) per kilogram more than foreign-sourced gold.

The tax would put Vietnamese gold traders in a disadvantageous position against other countries in the region, including Thailand, Indonesia, Malaysia, and Singapore, who currently impose no import or export tax.

Last year, gold exports accounted for $10 billion for Thailand, $8 billion for Singapore and $6 billion for Indonesia. Việt Nam's exports were $2.6 billion in the same period.

The marketer’s guide to AR: 7 rules of engagement

Marketing job vacancies more than triple since height of pandemic