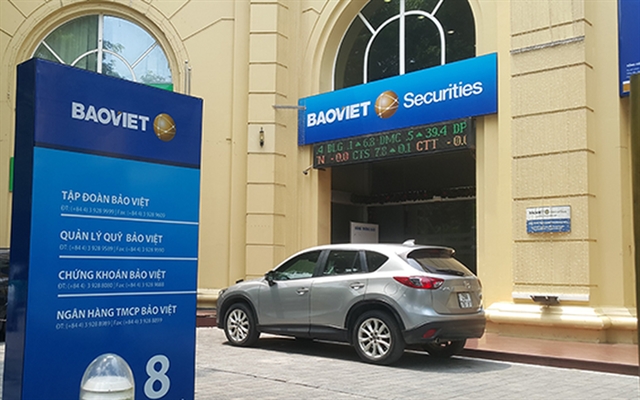 A car outside of Bảo Việt Securities' building. — Photo cafef.vn

Previously, in the first plan of the year, BVSC set a revenue target of VNĐ661 billion (US$29.2 million), with profit before tax of VNĐ157 billion.

However, as of September 30, BVS recorded revenue of over VNĐ784 billion, 2.2 times higher than that of the same period last year. Therefore, the securities firm’s profit after tax rose 118 per cent year-on-year to VNĐ185.1 billion. Accordingly, BVSC has completed up to 139 per cent of the profit target for the whole of 2021, which is VNĐ133 billion.

Based on the company's business activities and the actual situation of the stock market in the first ten months of 2021, BVSC’s management board decided to adjust the business plan.

Recently, BVSC Board of Directors approved October 12 as the last registration date to exercise the right to receive 2020 cash dividend at the rate of 8 per cent, meaning a shareholders owning one share will receive VNĐ800. The payment started from October 20.

With more than 72.2 million shares listed and in circulation, BVSC will spend nearly VNĐ58 billion to pay dividends this time to shareholders. Of which, Bảo Viet Group (BVH) is expected to receive nearly VNĐ35 billion with the ownership rate of 59.9 per cent in BVSC.

On the stock market, BVSC shares closed Monday at VNĐ41,500 per share, up 3.75 per cent compared to the previous session and more than double the price of the beginning of 2021.