KFC has unveiled a Mexican-inspired chicken line-up to die for with the launch of ‘Los Retornados’, a Day of the Dead-inspired celebration of its new Chickadilla product. 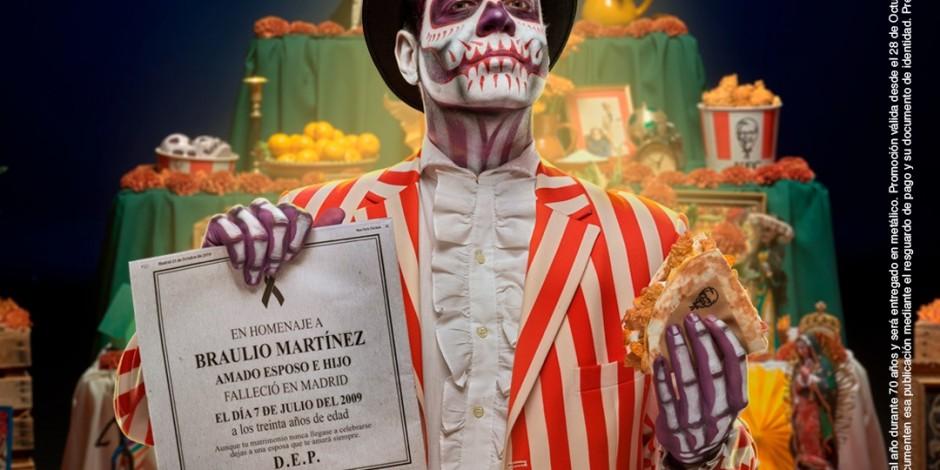 KFC displays Mexican spirit with Day of the Dead celebration

Devised by creative firm PS21 the campaign is born from the idea that the souls of the dead manifest themselves in our reality for one day only on 2 November, prompting the chicken chain to pledge a lifetimes supply of Chickadilla to any corporeal customers.

An accompanying campaign depicts real people who have survived near-death experiences who detail their own experience of what death means to them having come closer than most to passing beyond. Dubbed ‘The Returnees’ this adopts a biographical format to tell the story of each close shave in turn via an episodic format.

Unifying each dark tale is an element of uncertainty with viewers left in limbo as to the true nature of the experience until the taste of ‘Chickadilla’ passes each character’s lips.

Ethereal hopefuls wishing to blag their own guaranteed chicken supply must publish their obituary before becoming eligible for the prize. Fortunately, physical death is not required with KFC permitting participants to fake their funeral by committing their untimely demise to the small ads of a newspaper of their choosing.

Multicultural agency Orcí has previously capitalised on the growing embrace of the Halloween postscript with a series of satirical videos helping to popularise the event.